There is no physical paper form book that will be shipped out. You are purchasing a file for your computer in PDF format. You will require a PDF reader such as Adobe Acrobat Reader which is free at the link below. You will receive your manual link from SOAKL immediately after payment has been approve.

This is the complete 1300+ page digital service manual for Oliver 55, 66, 77, 88, 550, 660, 770, and 880 Agricultural and Industrial tractors. These are extremely rare manuals in paper form and this digital e-book has been scanned from the original document in high resolution.

These service manuals were mostly only available to Oliver mechanics and provide the  solution to just about any problem you may be having with your Oliver tractor.

GENERAL
Oliver tractors are precision engineered and designed
using knowledge gained over half a century of experience
and active participation in the wheel tractor
industry. Many new features are continually being
incorporated to make them the finest tractors built.
Each tractor is a complete unit adaptable to mounted
equipment and implements without having to make
major changes.

The optional equipment power
steering, power take-off, Powerjuster rear wheels,
belt pulley, Hydra-Lectric Control, Hydraulic Control,
power lift, three-point Hydra-Hitch, Power-Traction
Hitch and Power-Booster Drive can be installed
in most instances without interference and they
increase the working usefulness of the tractor.
The Fleetline 88 Series tractors first went into
production in ,April 1947. The 77 Series tractors
followed in June 1948 and the 66 Series tractors in
February 1949.

All the above series tractors are of the same basic
design with many of the parts interchangeable except
the Super 55 or 550 transmission which contains
completely different design characteristics from the
other models. Once the mechanic understands the
repair procedures for one series tractor, he will have
no trouble mastering the other series because of the
simplicity and similarity in design.

Four types of fuel systems for the basic engine have
been used in the Oliver tractors: an HC engine (high
compression, gasoline fuel), a KD engine (low compression,
kerosene distillate fuel), a diesel engine
(compression ignition, diesel fuel) and an LP-Gas
engine (high compression, liquid petroleum fuel). In
addition a specially modified KD engine was available
for operation at altitudes above 5000 feet. Of
these, the HC, Diesel and LP-Gas engines have
proved to be the most popular.

Power from the engine is carried to the transmission
through a single plate, dry, disc type clutch and the
power take-off is driven directly from the engine
flywheel making it independent of the engine clutch
operation. The transmission is designed to give six
forward and two reverse speeds from one shifter
lever.

The transmission may be modified on all
Fleetline 77 and 88 Series tractors to give four
forward and four reverse speeds. On Super Series
this modification is only applicable to tractors prior
to Super 88 serial number 35 785-800 and Super 77
serial number 40 867-700 except on special applications.
On 770 and 880 Series, transmission modification
is only possible on special application.

There are no reviews yet. 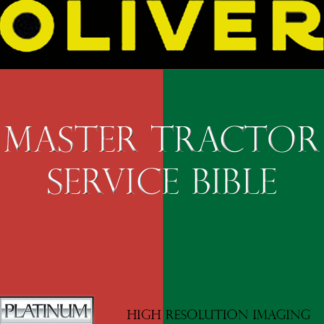 Enjoy our collection of All Things Wonderful. Dismiss